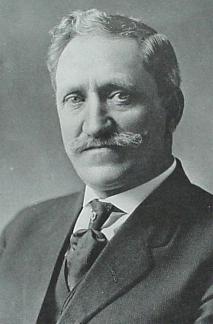 JOHN P. KINTZELE, register of deeds, is one of the best known men in Clark County. Coming here over thirty-five years ago, he identified himself with the development of the southeastern part of the county from the very first, and his election to his present office came as the natural result of a long career of usefulness to his fellow men. He was born in Milwaukee, Wis., Jan. 21, 1860, and there attended the parochial schools, graduating from Mayers' Commercial Business College, in his native city, in 1890. For a time he was stenographer for Ludwig & Somers, prominent Milwaukee attorneys, with whom he received, considerable legal training. Subsequently, he became accountant for the Northern Manufacturing Co., at Seymour, Wis., and under the reorganization of that concern as the Romadka Manufacturing Co., came to York Township in 1883, as accountant and manager. In Section 24, York Township, a large sawmill and factory was established, one of the largest in the county at that time. With the hamlet of Romadka, Mr. Kintzele's name has since been connected.

After leaving the employ of this company, Mr. Kintzele established relations with various concerns as manager of large logging industries and in the sale of large quantities of wild land. Gradually, he went into business for himself, and became widely known as a real estate agent, timber and fuel dealer, and businessman of more than usual ability. For the past few years he has been extensively engaged in shipping fuel from various sidings along the Lynn Branch of the Chicago, Milwaukee & St. Paul Railroad, handling sometimes as high as 6,000 or 7,000 cords annually.

For many years Mr. Kintzele has taken an especial pride in his farm at Romadka. Having previously purchased the place, he moved on to it after his marriage in 1887, and started its development. At that time it was a tract of forty acres, with a cleared acre and a small house as its only improvements. It is now a splendid place of 160 well cultivated acres, excellently equipped with implements, tools and machinery. The various farm buildings are of the best, and the commodious residence, surrounded by a well-kept lawn, and ornamented with flowers and shrubbery, is a credit to the township. It is equipped with modern conveniences, including acetylene plant, heating plant, air pressure water works, telephone and other comforts. Throughout the county Mr. Kintzele's activities have been many. As a leader in agriculture he is treasurer of the Clark County Agricultural Association. Thoroughly interested in the development of his neighborhood, he has been treasurer of the Lynn Mutual Fire Insurance Co. for the past ten years, and a stockholder in the Lynn Telephone Co., as well as a stockholder in the Neillsville Canning Co. In the financial world he has been vice president of the State Bank of Granton since its organization in 1903, a director in the First National Bank of Neillsville, and a stockholder in five other county banks.

With these many interests, Mr. Kintzele has nevertheless found time to serve in many public offices. For many years he was town clerk of the town of York, and clerk of his school district. For eight years preceding his election as register of deeds, he was chairman of the town of York, and as such was a member of the county board, serving that body as chairman of the county auditing committee. As a natural result of this distinguished service he was persuaded to run for register of deeds in the fall of 1916, and being elected, took office Jan. 1, 1917, now serving with efficiency and popularity.

Hope you have enjoyed these photos! So glad to be able to share them on a website where others with an interest may find them.