Ninth street, observed their golden wedding anniversary in the presence of relatives and friends at their home. The couple had been feted at a pot luck supper on Thursday evening at the Wesley hall of Wesley Methodist church. During the two observances the couple were remembered with many gifts and greeting cards which they opened at the gathering, The junior choir of the Wesley Methodist church, under the direction of Mrs. Ella Handrow, presented two selections for the couple, "God Who Made Us Earth and Heaven" and "Silver Threads Among the Gold".

The Rev, Samuel Beers, pastor of the Wesley church, spoke a word of blessing, and this was followed by selections of poetry in both English and German which were composed and read by the sisters of the bride of 50 years ago. At 6 o'clock a dinner was served for which the flowers and candles appointing the table were m the golden theme. The home was also attractively decorated with arrangements of golden colored chrysanthemum plants and bouquets.

Mr. and Mrs. Steuerwald were married on October 1, 1892, at the home of the bride's parents in Millersville, where her lather had been born and grown up, and where her parents celebrated their golden wedding anniversary In 1920. The Rev, F, Karnopp performed the nuptial ceremony.

After their marriage Mr., and Mm Steuerwald moved to Milwaukee where they operated a grocery store for several years. While there a son, Walter, was born to them. About 1900 they sold their store and moved to Clark county where they took up farming as a livelihood for several years, Later Mr. and Mm Steuerwald sold the farm and began a farm implement and hardware store in Loyal, Wis., and during this time another son, Roy, was born. A daughter, Leona, born in 1901, passed away in infancy.

In this city both Mr. and Mrs. Steuerwald were very active in the Methodist church, the former having served as superintendent of the Sunday school and the latter being in charge of the cradle roll department. Very few Sundays were missed by either of them as they lived next to the church.

During the first World war the implement business of the Steuerwald was traded for a farm and logging camp in Marathon county, northeast of Marshfield. At this time Walter enlisted in the United States Marines to serve his country in the first World war. While they had the camp, Mrs., Steuerwald's days were busy ones, for she had charge of all the cooking and baking each clay for the men working there who varied in number from 15 to 25.

In 1923 the family moved to Plymouth and resided on a farm near there until 1925 when they moved to Sheboygan and settled at 1533 N. Ninth street, where they have lived since. Both their sons are married and with their families live in or near the city. They have two grandchildren, Erla, who Is attending the University of Wisconsin, and Delores, who is in the eighth grade of the U. S, Grant school.

At the present time Mr. Steuerwald is employed as yard foreman at the Frost Veneer company and is also district field deputy for the Woodmen of the World and Supreme Forest Woodmen circle, fraternal life insurance societies.

Although Mrs., Steuerwald is 72 and her husband 71, they both enjoy good health and Mr. Steuerwald still teaches his Sunday school class at the Wesley Methodist church of which both are loyal members.

Among those present at the observance on Sunday were the following from away: Mr. and Mrs., William Prigge, Mrs. Alvina Wuestenhagen of" Millersville; Mr. and Mrs. Fred Hingess and Mrs. Anna Prigge of Cleveland; Mr. and Mrs. Robert Hallwachs of Manitowoc; Mr. and Mrs. Louis Hellman, Mr. and Mrs. Frank Pokrandt and sons, Tom and Foster, of Oshkosh.

On July 17, 1870, she was born in Millersville, the daughter of Mr. and Mrs. John Prigge. She attended the local schools and on October 1, 1892 she was married to Fred Steuerwald at their farm home in Millersville.

After their, marriage the couple moved to Milwaukee where Mr. Steuerwald operated a grocery store. From there they went to Loyal In Clark county where they had a farm. They remained there a number of years, coming to Sheboygan 17 years ago.

Mrs. Steuerwald was a faithful member of the Wesley Methodist church. When the couple celebrated their golden wedding anniversary in 1942, they were entertained at a pot luck supper in Wesley hall of the church. Surviving her are her husband, two sons, Roy of Portage; Walter of Greendale; two grandchildren, 1 brother, William Prigge of Millersville; four sisters, Mrs. Robert Hallwachs of Manitowoc; Mrs. Emma Specht of Sheboygan; Mrs. Alvina Wuestenhagen on the homestead in Millersville, Mrs. Fred Hinges of Cleveland. One daughter, two sisters and a brother preceded her in death.

Funeral services will be conducted at, the Ballhorn Funeral chapels on Thursday afternoon al 1:30 o'clock. The Rev. Samuel Beers of Wesley Methodist church will officiate and burial will be In Wildwood cemetery. The body can be viewed at the funeral chapels beginning on Tuesday evening. 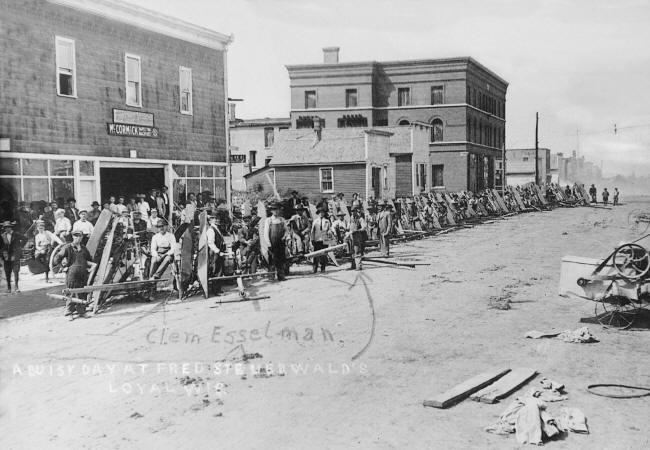 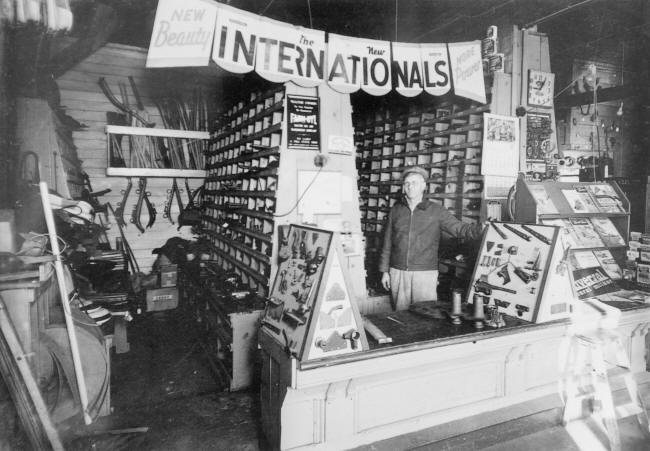 Interior of the Implement Store once owned by Fred Steuerwald