A certain Indian Chief conveyed a certain territory or tract of land on May 1, 1767 to Jonathon Carver who died Jan. 3;, 1780, leaving two sons and five daughters and sole inheritance, that said heirs duly conveyed their interest to Samuel Peters, who by deed dated July 13, 1815, conveyed 536,640 acres of said land to Benjamin Connor subject to his choice of location. Benjamin Connor died Dec. 1835 leaving first party at his heir at law. Therefore, first party conveys to second party 19,000 acres of said land, the same including Section 8, Township 29 North, Range 2 East. According to certificate of selection of Stephen Schooley attached to this deed Section 8, Township 29 North Range 2 East and other land. Made pursuant to the Act of Congress approved May 20, 1862 to secure homesteads to active settlers on the Public Domain.

The United States of America to prosper Stimson May 24, 1879.

On March 6, 1948 Rudolph Umlauft died. February 18, 1952 a daughter Ruth and husband Melvin Juedes bought the farm from his mother, Mrs. Umlauft. Juedes have a daughter Karen and a son Floyd. At present they have 200 acres of land. 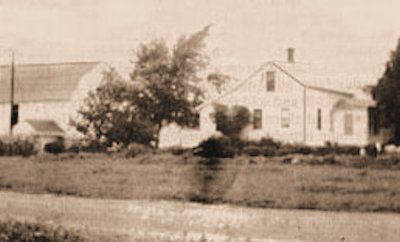 Mrs. Juedes (Ruth) is a daughter of Rudolph Umlauft.