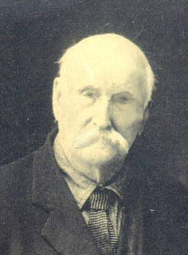 ARNE C. OLSON, who engaged in agriculture in Section 30, Mayville Township and was born in Norway Feb. 4, 1843.  He was the son of Ole Johnson and his wife, Ellen Johnson. His father died in 1873, and his mother in 1889. In 1870 Arne was united in marriage with Ellen Johnson, who was born Jan. 1, 1845. He came to the United States in the following year, 1871, landing at Quebec, Canada, and then proceeding by way of Detroit to Milwaukee, and from there to Blair, Wis., where he remained six months. He then came to Neillsville, but after a short stay there took up his residence in Hoard Township, where he went to work in a lumber camp, being thus occupied for fourteen seasons, in camp and on the drive. His family joined him in the fall of 1872. He bought his present place, or rather, twenty-five acres of it, homesteading another tract of eighty acres adjoining, and has since brought the size of his farm up to 145 acres. Like most early settlers, he had to build a log cabin for his first residence, and often carried supplies on his back from Colby. Since then he has cleared his farm, which is now a well improved piece of agricultural property, including among the building a brick house, built in 1896. He also erected two large barns, both of which were blown down and destroyed in the cyclone of 1905, but have since been replaced by other buildings. Mr. Olson raised Durham and Guernsey cattle, milking up to as many as fourteen cows. IN 1914 he sold the farm to his son, Otto, with whom he now makes his home. He was one of those who organized Mayville Township in 1873, and cast his first vote in this township. He was also the second chairman of his township, serving two years. He and his wife have been the parents of eight sons--Oluf, born in 1871, who is now serving as deputy sheriff; John L., born in 1873, who died in 1911; Anton E., born in 1875, now a farmer of Maplehurst; Peter M., born in 1877, who is connected with the lumber business at Atlanta, Wis.; Morris ., born in 1878, now proprietor of the home farm. Mr. Olson has forty-three grandchildren. He is a member of the Norwegian Lutheran Church, helping to start the church of his section, and has been its treasurer many years.

The "C" in Arne Olson's name probably stood for an old family name in Norway.