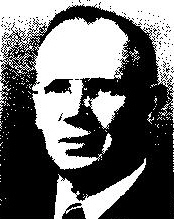 Dr. Dike once lived in the house that is now the funeral home in Owen, Clark Co., Wisconsin.  He delivered Neil and Eileen Vater's three older boys (birth dates from 1942 through 1945).  He had served in China during WW I, and then practiced most of his career in Owen and Greenwood, WI.  We believe his practice began prior to that of Dr. William Olson who was a long time physician in the area.  Besides his medical practice, he served as the treasurer for the Board of education at least two years (1945 - 1947).  During that same time frame, he is sited as one of the local businessmen who contributed funding to defray the costs of the Owen High School Annual.

Dr. Dike's wife, Hazel, was a nurse, and she sometimes worked with him in his office.  She was born in the heat of the summer, August 18, 1895. This couple had two daughters.  Elizabeth A. who was nicknamed "Betty" was born in 1925.  Her baby sister, Bernice H. was born in Dec. of  1928.  They both attended the local Schools.

The Dike's retired to Manatee County, Florida.  Dec. 1, 1963, a car swerved onto a sidewalk, hitting Dr. Benjamin Dike and his injuries were fatal.