ROBERT JAMES MCBRIDE, for many years one of the foremost citizens of Clark County, was born in Philadelphia, Pa., June 28, 1847, son of Robert and Mary (MacChesney) MacBride, and grandson of Thomas and Elizabeth (Haddock) MacBride. He was reared in his native city, passed through the grammar and high schools, and entered the law office of David Paul Brown, distinguished attorney. In 1866, at the age of 19 years, he came west on a visit to friends in Davenport, Iowa, and was there persuaded to cast his lot in Neillsville. Accordingly in that year he came here, and secured employment as accountant with Hewett, Woods Co. While thus engaged, he studied law with B. F. French. Upon being admitted, he opened his office in the Hewett Block, the only brick building in the county. With this beginning, he attained his present position as dean of the Clark County Bar. He has been connected with practically all the important litigation in the county since his first admission, and has won a high position as both advocate and counsellor. For a time after leaving Mr. French's office he practiced alone. Then George A. Grundy became his partner. After Mr. Grundy's death he was alone again. At the close of the Spanish-American War, the firm of MacBride, Clark MacBride was formed, consisting of Robert J. MacBride, Homer C. Clark and Robert J. MacBride, Jr. This partnership continued for about a year.

Shortly after his arrival here, Mr. MacBride began to take an active part in local Democratic politics, and his influence spread until he was a factor in state politics as well. In 1869 he was elected county judge, and in spite of the fact that the community was strongly Republican, he was twice re-elected. He resigned in August, 1878, and his term was filled by C. A. Youmans. In 1881, in the Republican district including Clark, Lincoln, Taylor and Wood Counties, Judge MacBride was elected to the legislature. In that session Clark County became a separate district, and in the fall of 1882 Judge MacBride was elected to the biennial session of 1883-84. His work in the legislature was notable, he served on many committees, and in 1883 was chairman of the Committee on Incorporations and of the Judiciary Committee. Among the important bills he introduced were those creating the State Railroad Commission and the State Insurance Department, as well as that establishing a chair of pharmacy at the University of Wisconsin. In 1890 he was elected to the state senate, was elected president pro tem of that body in 1893, and served in that capacity the greater part of the remainder of his term. Among other important work was his service as chairman of the Reapportionment Committee, which newly apportioned the Assembly, Senatorial and Congressional districts of the state. In 1904 he was nominated by the Democrats as a candidate from his district for United States Congressrnan, but declined the nomination. For many decades Judge MacBride was a familiar figure in county, district and state Democratic Conventions, and in 1880 and 1888 he was a delegate to the Democratic National Convention. In 1892 he was elected presidential elector at large on the Democratic ticket, leading that ticket by a handsome margin. In this capacity he presided at the meeting of the presidential electors at Madison, casting the vote for Cleveland, the first Democrat to be thus honored in the state since the days of Pierce. In 1894, Judge McBride was appointed, without solicitation on his part, by President Cleveland to be United States Counsel to Edinborough, Scotland. He filled the duties of this position in a dignified and efficient manner and retired after President McKinley's election with the profound respect of all with whom he had come in contact.

In military life, Judge MacBride in 1882, and 1883 held the rank of captain as judge advocate of the Third Regiment, Wisconsin National Guard.

As early as 1870 he served as school clerk, and has since continued his warm interest in educational matters in city and county. For many years he was a member of the Library Association. For a short time he had an interest in the mercantile firm of Dickenson MacBride at Neillsville. One of his especial prides is the part he took as one of the officers and directors of the Black River Railroad, which on July 1, 1881, operated its first train from Merrillan, and which is now a part of the Omaha system.

Judge MacBride was married June 28, 1870, to Addie J. Gates, born in New York, April 15, 1849, daughter of Daniel and Jane (Hewett) Gates, prominent pioneers. This union has been blessed with two sons, Oscar W. and Robert J., Jr. Oscar W., who now holds a responsible position with the American Express Co. at St. Louis, Mo., married Catherine Crowley, of Columbia County, Wis., and has one child, Beatrice. Robert J., Jr., a graduate in law of the University of Wisconsin, and a former partner of his father's, is now successfully practicing his profession at Portland, Ore. He is the father of two sons, Douglas and Le Mont, graduates of the Neillsville High School Thomas MacBride, grandfather of Judge MacBride, was a native Of Paisley, Scotland, and was there reared and married. A few years after the War of 1812, he brought his family to America and located at Philadelphia, where he spent the remainder of his life. The founder of the MacBride family in America, he was a man of sterling principles and devout faith, being a staunch supporter of the Presbyterian church. Robert MacBride, son of Thomas MacBride and father of Judge MacBride, entered as a young man into the cotton manufacturing business, becoming in time the owner of several mills. Like his forebears before him, he was a prominent worker in the Presbyterian Church. He assisted in erecting the Frankford Presbyterian Church, of Philadelphia, and was one of its most liberal supporters. A thorough patriot, he gave the government the benefit of his experience in textiles, as a member of the Quartermaster's department during the Civil War.

By his first wife, Mary MacChesney, he had five children: Thomas H., William C., Robert J., Mary J. and Isabella C., while by his second wife, Louisa Morrison, he had .two children, Taylor N. and Anna W. Thomas H. was a captain in the Civil War, in the 100th Pennsylvania Volunteer Infantry, better known as the "Roundheads," and was for many years connected with the United States Pension Department. He died at Cincinnati, and is buried in Covington. William C. served as a non-commissioned officer in the same regiment. In time he became a foremost figure in American journalism. For many years he was Washington correspondent for the Cincinnati Enquirer, and while serving as such was for one year president of the famous Gridiron Club of Washington. For several months he was editor of the New York Journal. He now lives retired in Washington. Robert J. has already been appropriately mentioned. Mary J. is now Mrs. Cheney of Philadelphia. Isabella C., who became Mrs. Kimball, is dead. Taylor N., for many years court reporter for the Orphan's Court, Philadelphia, is dead. Anna W. died as a young girl. 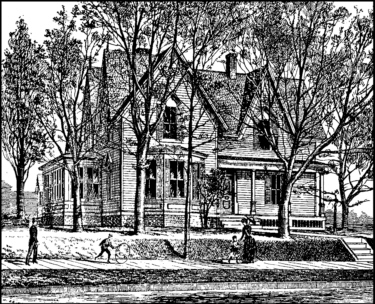 This residence stands on one of the most sightly locations in Neillsville. It is opposite the court house, and from it, a fine view of the entire northern and western part of the city is had. The grounds consist of nearly half a block, which is covered with beautiful trees and shrubbery. Mr. MacBride is solicitor for the Chicago, St. Paul, Minneapolis & Omaha railroad company, and the greater portion of his time is taken up with business of the company, although he has much other legal business before the various courts of the state. ("Clark County Illustrated" by Saterlee, Tifft & Marsh; 1890).

"On last Friday, Hon. R. J. McBride introduced a bill in the legislature for the incorporation of our village under a city charter.  Our city would be greatly benefited by the incorporation and this idea is greatly admitted to by even those who were formerly opposed to that move, previously, the measure had been twice defeated."  Clark Co. Press, Feb., 1882.