SOLOMON FORDYCE JASEPH, proprietor of a small but fine estate just south of Neillsville, where he is engaged in raising chickens, garden vegetables, fruit and other products, was an early settler in Clark County, coming to Neillsville about forty-six years ago. He was born in Cattaraugus County, N. Y., July 23, 1848. His father's name was Fordyce Jaseph, and his mother's, before marriage, Rachel Elizabeth Loomis. Both parents were natives of Vermont. From the early age of 8 years, however, the subject of this sketch has practically made his own way in the world, so far as aid from his parents is concerned, as at that age he went to live with his grandfather Loomis in Wyacena, Columbia County, Wis., remaining with him until he was 19. He then made a trip westward to Lake Benton, Minn., this being at about the time of the Indian massacres in that section. Returning to Poynett, Columbia County, Wis., Mr. Jaseph learned the trade of harness maker, and in 1872 came to Neillsville, going to work for P. S. Dudley the first year. He then engaged in the harness business for himself in the block now owned by Dr. Bachman, remaining there until 1877. Then, selling out the harness business, he put in a stock of groceries anderockery, which line of mercantile enterprise he carried on for two years. Selling out that business, Mr. Jaseph became assistant postmaster under J. W. Ferguson, and was thus occupied for a year or more. His next venture was to engage in the commission business in the basement of a building that occupied the location of the present Neillsville bank, and that also he followed for two years, subsequently building a store on the north side, where Dr. Leason now lives, and conducting a general mercantile business for a similar length of time. He then started where Victor Wolfer's drug store is now located, in what was then known as the Regulator Building, but after two years closed out that business and opened a confectionary and restaurant, which he conducted for a while.

Having for some time taken a more or less active part in politics, Mr. Jaseph now ran for sheriff and was elected on the Republican ticket, being the incumbent of that office in 1907 to 1910, and subsequently being under-sheriff under Robert Unson for two years. At the end of that time Mr. Jaseph purchased fifteen acres of land just south of Neillsville, in a picturesque location, overlooking Black River, the property being then a jungle of brush and in a dilapidated condition, and here he has constructed a fine residence known as Riverside Home, remodeling the old house that stood on the premises. He has also built a cement chicken house and a hog house of the same material. His yard, set out with shrubbery and flowers, is a model of beauty and art in landscape gardening, and is visited by people from miles around. One acre of his land is devoted to fine fruit trees, and he also raises fine vegetables and experiments in sudan grass, alfalfa, vetch, etc.

Mr. Jaseph belongs to the Masonic order, the Odd Fellows, of whose lodge he is one of the oldest members in Neillsville, the Royal Arcanum and the Woodmen.

He was married Jan. 15, 1873, to Nellie E. Dole, daughter of A. 0. Dole, assemblyman from Poynett, Columbia County, and he and his wife have had four children--Florence E., Lynn Dole, Hazel and Hollis W., all of whom graduated from the Neillsville high school. Florence, who married H. B. Robbins, died at the age of 24 years. Lynn D. is a prominent attorney of Green Bay, Wis., a graduate of the State University, who ran for attorney-general and county judge on the nonpartisan ticket, carrying his residential city. Hazel is the wife of Ed E. Erickson, a printer, of Elroy, Wis. Hollis W. resides in Minneapolis, Minn. 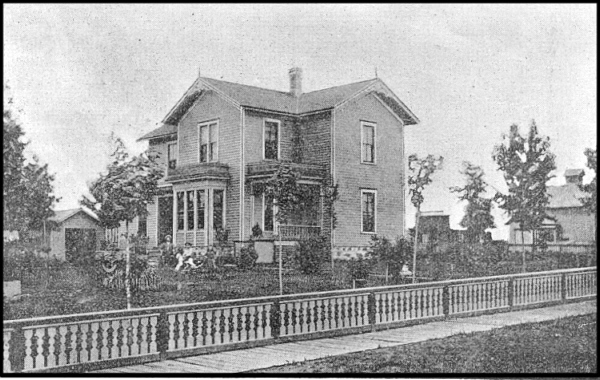 The above cut is a faithful picture of the beautiful home of Sol. F. Jaseph. The place is situated on the corner of Clay and Fifth streets in Neillsville, and the grounds are one-fourth of a block in size. Mr. Jaseph takes the greatest pride in beautifying his home, and his large lawn. Fine shrubbery and pretty flower garden attracts universal attention. Mr. Jaseph is a successful merchant, owning and operating a general store on the North Side. He is universally esteemed as a businessman and neighbor. ("Clark County Illustrated" by Saterlee, Tifft & Marsh; 1890).