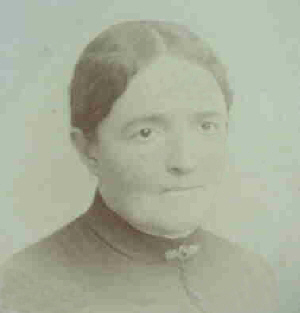 Elizabeth Marie Ayers passed away March 21, 1930 at the home of her daughter, Mrs. M. F. Beaulieu. Tuesday morning she seemed in her usual health, had finished eating breakfast and was still sitting at the table conversing with her daughter, when stricken. Mrs. Beaulieu summoned aid at once, but her mother never regained consciousness and passed away on Friday.

Mrs. Ayers was born in Germany, March 16, 1844, the oldest of five children of Lambert and Marie Theresa Miller, and has survived them all. She came with her parents to America when 15 months old, crossing the ocean in a sailing vessel which required six weeks at that time. Her parents settled on a farm in Washington County, three miles from Hartford, Wisconsin. They lived there until Elizabeth was 12 years old, then they sold their farm and decided to emigrate farther north. Three of their neighbors and families joined them and started north in covered wagons drawn by oxen and driving their stock.

They finally arrived in Neillsville after enduring great hardships and her folks bought and settled on wild land, which is now the Dux farm on the Globe road.

On March 18, 1861 she was united in marriage to Lewis L. Ayers, who preceded her in death 25 years ago. To them were born five children: Frank, deceased: Mary. Mrs. E. A. Holcomb of Neillsville Charles of Minneapolis and Ernest of Lynn. She also leaves 12 grandchildren, nine great grandchildren and several great grandchildren.

Mrs. Ayers was the oldest resident of Clark County, having lived here continuously for 74 years. the Sunday preceding her death was the 86th anniversary of her birth.

She lived a noble, useful and unselfish life, always thinking of and doing for others, never wanting much for herself. Another good woman is gone from our midst and she will be greatly missed.