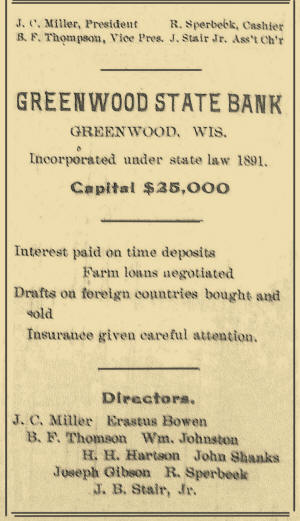 Joseph Gilson and L. Sperbeck of Medford, were in the city Saturday and made arrangements to divide some of the bank stock in the Greenwood State Bank between local capitalists, as follows: J. C. Miller, B. F. Thompson, John Shanks, H. H. Hartson, Erastus Bowen, Wm Johnston and H. Bruengger.

While Mr. Gibson has practically owned this bank and has given the public one of the most careful and conservative institutions in this section, and one in which business public have vested unlimited confidence and trust, there still was feeling locally that more of the stock should be owned here and he has consented to divide it among men who will maintain its past integrity for the public's best interests.

When such men as named above invest in this bank, it means much for Greenwood. First, it is a renewal of the past implicit confidence; second, it gives additional local strength; third, it will make such men as J. C. Miller and B. F. Thompson permanent fixtures here.

The Gilsons and L. Sperbeck still retain stock in the bank and with this combination as it now is we are well pleased and can assure the investors that they will have full support of central and northern Clark county and believe it will make a profitable investment for the new stockholders.