Funeral services were conducted by Rev. Francis Piekarski at St. Hedwig’s Church here on July 9th for Mrs. Mary Konieczny, 91, who passed away at the General Hospital at Minneapolis on July 5th, 1949 of complication following a fracture hip.

Mary Neklewicz was born Jan. 14, 1859 in Poznan, Poland. She was united in marriage there on Sept. 1, 1878 to George Konieczny, who with three daughters, preceded her in death.

She came to America with her husband in 1886 and resided at St. Paul, coming to Thorp (Clark Co., Wis.) in 1898. She had spent the past nineteen years with her daughter, Mrs. Mary Lee in Minneapolis.

Burial was made in St. Hedwig’s Cemetery. Pallbearers were grandsons of the deceased, Frank, George, Victor and Ray Konieczny, Frank Bonczyk and Joseph H. Lee. 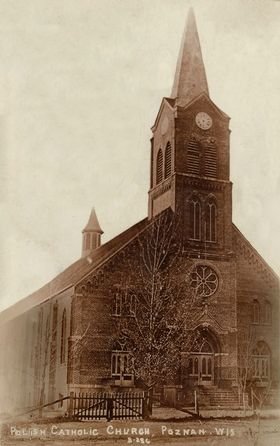 Mary Konieczny  is buried in the cemetery behind St. Hedwig's Church,

in a Polish settlement known as "Poznan".  It is located 2 miles East of Thorp, Wisconsin on County Rd. X.