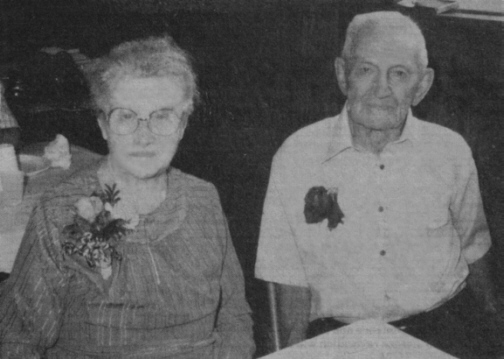 Dodte couple brings family, class together as they celebrate 50 years

The celebration of a golden anniversary, a couple of birthdays, a class reunion and a family reunion all took place recently at the Neillsville Senior Citizen Center with Bernard and Esther Dodte the center of attention.

More than 200 attended the festivities which included the Dodte’s 50th anniversary gathering, the honoring of Bernard on an upcoming birthday, the joining of the surviving members of the Neillsville High School Class of ’09, and the gathering of the Dodte family.

Mrs. Dodte, nee Esther Sharp, is a Cable native where her parents, Walter and Luna Sharp, homesteaded. (Five of the ten children of that family gathered at the Neillsville party.)

Esther came to Neillsville to attend a teacher training program at the Neillsville High School, a school that employed her brother, Manley as agricultural instructor. She then taught in rural schools for several years before moving to Wheaton, Illinois, to continue her education. Upon her return, she took up teaching duties at Hiawatha School, earning $80 per month and meeting a bachelor farmer who would soon be her new husband.

The day after school was out, May 7, 1931, she married Bernard Dodte in Mondovi ceremonies. The Rev. George W. Longnecker of Neillsville officiated.

Esther has been a member of the Pine Valley Homemakers since its beginning, almost 50 years. Both she and Bernard are members of the Loyal Free Methodist Church.

Bernard, the son of Carl and Wilhemina Dodte, joins his wife in living on the Town of Pine Valley farm where he was born. He graduated from Neillsville High School in 1909.

Before getting into farming, Bernard worked at the Hancock Experimental Farm. (It was at that farm that Bernard met Casper Peter, now of Watertown, who had recently come from Germany with a nitrogen cartel. Peter often visited the site to study farming methods. He was a guest at the recent celebration.)

Also on the program were Judge Lowell Schoengarth, Bernard’s nephew, who recalled a July 4th of 50 years ago on the Dodte farm; joining him was Bruce Beilfuss, a Neillsville native and now Chief Justice of the Wisconsin Supreme Court, who told of how he and his cousin, Bernard, had begun keeping records for the Dodte dairy herd. (That effort led to world-wide recognition for number of years in production for the dairy operation.)

During the early 1930’s, Bernard was involved in numerous organizations promoting better conditions for farmers, holding office in many of them. In 1972, he was presented with a plaque from the Clark County Holstein Breeders for his 48 years as an active member. In 1980, he received the Agri-businessman Award from the Neillsville Area Chamber of Commerce. He also served on the Town of Pine Valley board, serving as treasurer for five years.

Now joining Bernard is his son, Tom, in the farming operation, which includes 40 original acres and many other rented acreages.

Taking part in the program or receiving special recognition at the celebration were Frank Pickering, a missionary from Minnesota; Carl and Lucy Sharp and children, Boise, ID; and Tom and Lydia Dodte, Neillsville, Wis. Also introduced were sisters and a brother of Esther, including Ida Hungerford and Eva Johanssen, both of Clearwater, FL, Lucille Sharp of Delano, CA, and Ray Sharp of Minneapolis, MN.

Participating in a musical program were the Gospel Cowboys, composed of Allen, Alvin and Adrian Alleshaski and Larry Jennings; Mavis Dunn and Evangeline Morris, cousins of Esther’s from Florida and California.

In a special presentation, Ruth Dodte, was presented with a good-luck horseshoe for traveling the greatest distance, Fairbanks, AK, to attend the event.

Another highlight of the day was seating of Mayme Imig at the head table. For Bernard and Mayme, it was a class of ’09 reunion; they are believed to be the sole surviving members of that class.

The tables were decorated with floral centerpieces and golden candles. Food was served by women of the Loyal Free Methodist Church while the anniversary cake was made by Virginia Thoma and the birthday cake by June Clouse.

Family pictures were displayed on several bulletin boards at the open house. Following the public gathering, a family reunion was held at the Dodte farm.

Among those attending from out-of-town were Californians, Mr. and Mrs. Cleo Sharp of Fresno, Altea Whalen of Sacramento, Mr. and Mrs. Mavis Dunn of Upland, Sidney Sharp of San Francisco and Mr. and Mrs. Smigelski and children of San Jose; Minnesotans Mr. and Mrs. Gary Wold, Myrtle Commers and Mr. and Mrs. George Albrecht and daughter, all of the Twin Cities, and Lucille Pickering of Sauk Rapids; Illinoisians Mrs. Victor Taylor and Lilli and Linda of McHenry and Jean Metcalf of Villa Park; and from the state of Washington came Mr. and Mrs. Joel Nye, Spokane and Mr. and Mrs. Bill Dodte, Renton.