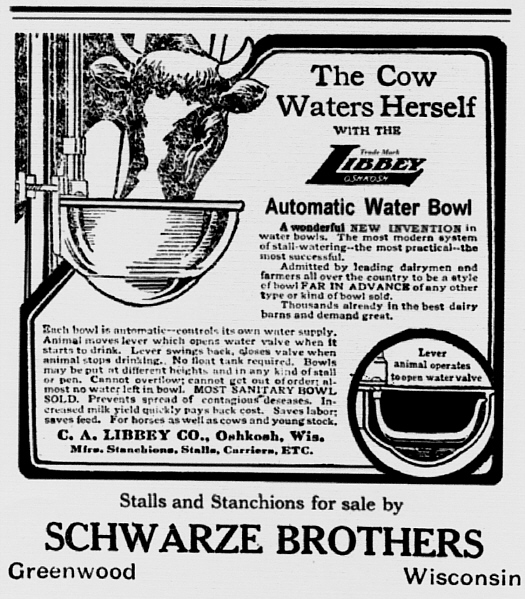 The Schwarze Brothers' Machinery and Implement dealership once stood where the Farmer's and Merchant's bank now stands on Central Ave., in Greenwood, Wisconsin. It was owned by Albert and Adolph Schwarze, the son's of Herman who had a blacksmith shop in the township of Warner. Albert initially followed in his father's footsteps by beginning a career as a blacksmith and had a thriving business with Fred Rossman. As the world became automated, he and his younger brother, Adolph, met the needs of the time and opened the business represented in the Ad below. After 35 years of business, this establishment was sold and renamed, "The Haunschild Implement." Ultimately, the building was torn down and a new Farmer's & Merchant's Bank took its place.

At various times, Adolph served as both president of the new bank and as one of its directors. He was also a member of the Odd Fellows' Lodge and of the Zion Church in Greenwood. His son, Durward, also became a businessman and owned and operated the Drug Store in Granton, Wisconsin for many years.