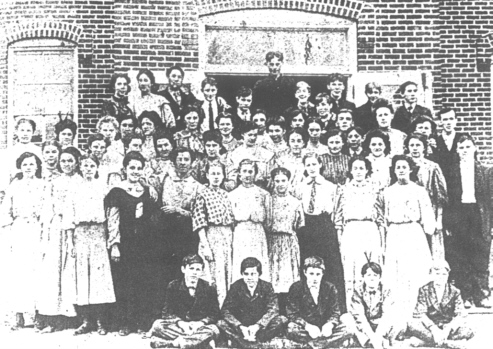 In 1908, the Loyal High School employed three teachers, who taught the fifty-two students such subjects as English, Algebra, Botany, Physiology and Arithmetic.

There were quite a few dropouts in those days, but even one or two years in high school was more education than many children received.

The times weren't too prosperous and the girls usually owned only a couple of dresses. A dress was often washed and ironed after coming home from school, and worn again the next day.

Although money was scarce, Mrs. Elva Catlin Lewis recalls that there wasn't any shortage of musical instruments and music around their house. Her father, grandfather, brother, and sister played the organ. A brother played mandolin and another brother played the guitar. They called it the Catlin Band.

Her father also played for dances to bring in extra money. He was a left-handed fiddler.

Her grandfather had lost his hearing in the Civil War. But, although he was deaf, he still played along with the group by placing a pencil on the organ and putting the other end in his mouth, he could tell from the vibrations what tune they were playing.

*This indivdual was identified incorrectly in the newspaper article as "Clarence Kippenhan", but it is in actuality Oscar Christoph Kippenhan (birth: April 25,1890 in Lomira, Dodge Co., Wis. -- death: March 5, 1967 in Castro Valley, Calif.) His grandson writes:

I'm pretty sure that is my grandfather Oscar Kippenhan - it looks like him. Chris and his family moved to Loyal on April 10, 1907 - Chris formed a company to operate the old grist mill - Greenwood Gleaner 4/11/07. Who ever identified the students in the photo must have gotten his first name wrong - Oscar's middle name was Chris but I don't think he ever went by that.

When Oscar moved to Montana in 1910 he corresponded with Emma Colby and some of the other names mentioned in that picture. I have a number of postcards that were sent to Oscar from these people with the latest teen gossip of what was happening in Loyal.

I have a few pictures of Oscar just around this time period and he looks very much like the "Clarence" in the photo.