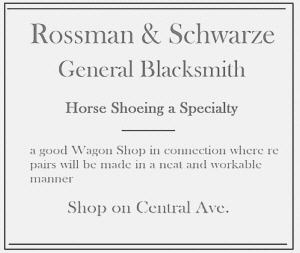 The paid advertisement above appeared in the Greenwood Gleaner Dec. 13, 1906 and was placed by Mr. Rossman and Mr. Albert Schwarze who were business partners at that time.

That would have been Paul Rossman of Greenwood. He was 58, and listed as retired blacksmith in 1900 census. He and my grandfather's Uncle John Klein may have been hunting buddies. Seems I remember an article after 1900 about John Klein and his wife being up from Waukesha at Rossmann's in Greenwood for hunting season.