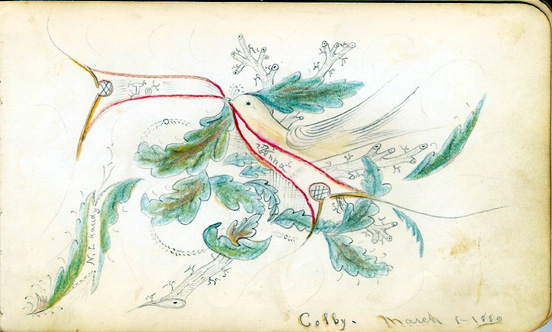 Pictured above is a page from an autograph album which once belonged to my great grandmother, Annie Petrie Olson. Annie's family - Adam Petrie, Elizabeth Moore Petrie and children George Walter, Edith and Annie lived in Unity from 1874 until 1888. The book must have been a Christmas gift in Dec., 1879. I counted 71 pages in the album with inscriptions from friends and relatives (1879 - 1889). Each inscription is hand written, usually with name, date and town. Some of the calligraphy is wonderful. In paging through, I see Unity, Thorpe, Brighton, Chippewa Falls, Concord, Stockbridge, Colby, Eau Claire, Neillsville, Oshkosh, Milwaukee, Withee. Most of the entries are from Unity. I eventually hope to provide scans of every page and this one, dated March 1, 1880 was from Nicholas L. Kaudy who resided in Colby, WI. To view his inscription, click the URL below the drawing.

I am a descendant of Mathias Kaudy and Marie Francoise Sillevie (Botey) Kaudy. They lived in Colby and had 12 children, one of whom was Mary Sylvia Kaudy, Mom's mother, who married Robert E. Foote, and moved to Fort Edward NY in 1903, when Mom was one year old.

I believe that he is the subject of the two entries

listed in your autograph album