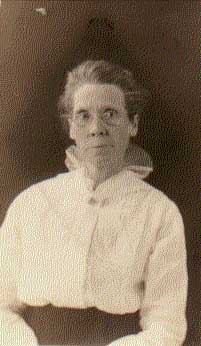 Above is a photo with these words handwritten on the backside: "Mrs. T. H. (Flora) Barber about 1913 - 1914. The first teacher in Owen, Wisconsin. She lived in Withee"

Theodore H. Barber was the principal of the Alma Center School of Jackson County and was married to Flora McCarty (b. 4 Apr 1862, d. 18 Mar 1916). They had a son named Joseph. Joseph married Sina Fadner, lived in Eau Claire, and had two children-Carl F. and a daughter.

You have written that Theodore and Flora had a son Joseph who married Sina Fadner..........The Joseph who married Lucina 'Sina' Fadner was Theordore's brother, not his son. I know its confusing because there were ALOT of Joseph's.