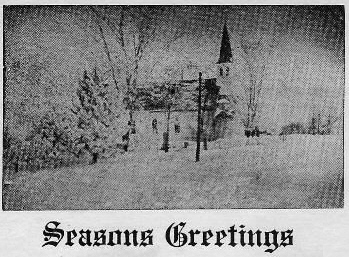 Below is a very old, and worn Chirstmas Card Photo of the first Danish Lutheran church of Withee, Clark Co., WI which was built in 1896. A group of Danes, living in Chicago in 1892 were offered "cheap" land in the area and they formed a Danish Colony which started a church in 1893. They believed the human body should be nurtured spiritually, physically and socially. The Danish language was spoken by the majority of the members and remained so well past 1940.