OLD CONGREGATIONAL CHURCH IN NEILLSVILLE TO BE RAISED

Neillsville, Clark County Wis. - One of the last Neillsville landmarks of the 19th century is being razed and soon will be only a memory. The First Congregational Church of Neillsville, erected at the corner of Fifth and West Streets in 1893, in downtown Neillsville, is in the process of being removed.

First Congregational was organized in Neillsville in January, 1891, and was incorporated as a church Feb. 2, 1891, with 33 charter members.

The first services of the Congregational group in Neillsville were held in the old Courthouse. Later they were conducted in the old City Hall and still later in the former Episcopal Church.

On Aug. 1, 1897, the Rev. George W. Longenecker arrived as pastor, and served until 1905, when he went to Dakota to serve two Congregational churches. During the next 11 years, the church was served by Rev. Albert R. Rice, the Rev. H. A. Risser, and the Rev. Frank Dexter.

On April 1, 1916, the Rev. Mr. Longenecker returned and started a second pastorate which was to continue for nearly 30 years and become one of the historic highlights of the community. He was not only pastor of the Congregational Church in Neillsville, but became a most popular minister.

He conducted more than 85% of the weddings, funerals, and special services in the city and was the first Neillsville minister to practice ecumenism with pastors of other churches, working closely with Protestant ministers and Catholic priests of that area.

He was a lover of horses and never owned a car, although he lived more than 30 years during the period of the automobile. He always kept from one to three horses to provide locomotion for his buggy and cutter. He also loved race horses and he went down in Neillsville history as the "racing person." He sometimes raced his horses at the Clark County fair and had two, "Miss Peter Dillon" and "Miss Long Acre," that raced on the Grand Circuit. The late Abe Lynch of Neillsville was his professional driver when his horses worked the Grand Circuit.

The Rev. and Mrs. Longenecker reared a family in Neillsville. There were two sons, Ernst and William, and two daughters, Gladys and Lois. William Longenecker, now deceased, was father of the University of Wisconsin Arboretum and also aided in development of the Listeman Arboretum in Neillsville.

The late Rev. Jacob Borowsky conducted services in the old Congregational Church building for Ukrainian Orthodox members. Since his death nearly seven years ago, no regular services were held in the church and it is now the property of Donald Johnson of Neillsville. 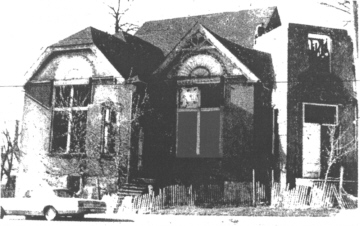