Thomas Vogel died on Feb. 14, the result of an accident, at the age of 17 years. Tommie was the youngest son of Mr. and Mrs. C. Vogel, was born in Loyal July 26, 1901. He has lived most of his life here and was a popular favorite among his school mates and young friends who join the sorrowing relatives in mourning his untimely death. He is survived by his parents, seven brothers, Charley of Montana, George and Henry in France, Frank. Matt, Joe and Louis of Loyal, five sisters, Mrs., Lee Clouse of Loyal, Mrs. Will Welch and Mrs. H. Robinson of Mont., Mrs. Otto Scheel, Colby and Mrs. G. Phipps of York. Five brothers preceded him in death.

The funeral services were held at the Catholic church at nine o’clock on Tuesday morning. Rev. Joseph F. Stenz officiating. Burial was in the Catholic Cemetery.

As a mark of respect every business place was closed during the funeral. The bereaved family have the sympathy of everyone. 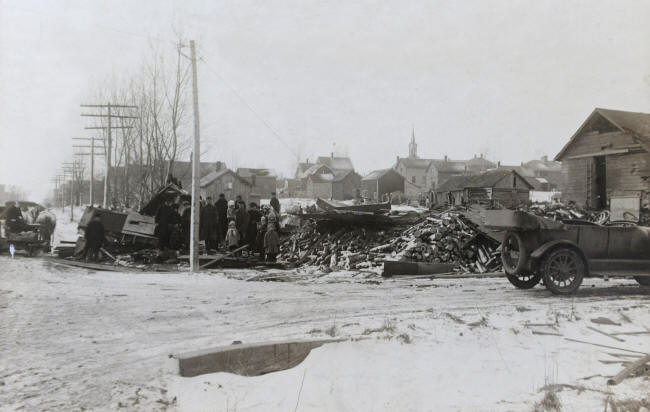 The Shocked Citizen's of Loyal, Wisconsin surveying the damage from the Jenk's Creamery Explosion.

Early Friday morning a terrible accident occurred at the creamery in Loyal, with victims being Art Jenks and Tom Vogel.  About 6 o’clock Friday morning, Jenks, the owner of the creamery, attempted to fill the boiler with water, being assisted by Vogel.  It is very evident that the boiler was nearly empty and when the cold water was turned into the hot boiler, it exploded with terrific force.

Jenks was blown completely out of the building and across a fence into the yard of his home adjoining the creamery.  He was killed instantly.  Vogel was found beneath the brick and debris of the boiler and was hurried to the Marshfield hospital, but died before arrival there.  Portions of the boiler and building were blown a distance of 500 feet and it is said that the force of the explosion was felt over the entire village.

Both Jenks and Vogel were married men and leave families.  Jenks owned the creamery and Vogel was employed there.  It was a sad accident and one, which has cast a pall of gloom over the entire village of Loyal.  Clark County Press, 11 Feb 2009