Mr. Donald H. Crothers and Miss Elizabeth Quinnell were united in marriage Saturday morning, Sept. 22, at the home of the bride's parents, Mr. and Mrs. H. Quinnell in Pine Valley, Clark County, Wis., Rev. G. W. Longenecker officiating. The groom was attended by his brother, Wendell H. Crothers, and the bride by her sister, Miss Ada Quinnell. Only immediate relatives of the bride and groom were in attendance. Immediately after the ceremony a fine wedding breakfast was served, and the bride and groom departed by auto for a trip among the lakes of northern Wisconsin. The bride was born in the town of Pine Valley, attended country school and Neillsville High School, from which she graduated. She then taught country school, later graduating from Stevens Point Normal School, after which she continued teaching as principal of State Graded Schools, the High School at Three Lakes, and the past year as one of the faculty in the County Training School at Rhinelander. She became quite widely known throughout the state, not only as a teacher, but also by reason of being one of the eleven Wisconsin teachers given a trip to Europe by the Milwaukee Journal in the summer of 1920. She is a young lady who has the respect of all who know her.

The groom is the older son of George E. Crothers. He was brought up on the home farm known as "Maple Glen" south of the city. He graduated from Neillsville High School in the same class with his future bride. He entered the State University, graduating from the Long Course in Agriculture just at the out break of the war. He enlisted immediately and was sent to Ft. Sheridan, where he took the Officers Training Course, and upon its completion, enlisted in the Aviation. His training in the Air Service was received at Gerstner Field, Louisiana and Ellington Field, Texas, and he was commissioned Second Lieutenant. He was retained in the service as instructor in aviation till Aug. 1919. After his return, he took charge of the home farm, in which he now has an interest.

The interest of the writer is so personal and vital in this couple and in this seemingly happy consummation of a school days romance, that he may justly claim some share in the congratulations and good wishes that may come to them, for their success and happiness he will in some measure enjoy.

On their return they will take charge of the home and farm at Maple Glen. 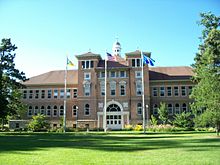