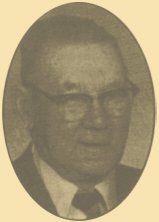 Alvin Schutte, age 89, died Tuesday, Oct. 7 at Memorial Nursing Home in Neillsville where he had resided for the past two years.

He was born on January 15, 1914 in Neillsville to John and Dorothea (Bowles) Schutte. He attended St. John's German Lutheran School, Neillsville. He was a lifetime member of St. John's Lutheran Church.

Before marriage, Alvin worked for a brief time in the circus out west, then Was employed at the Frank Marg Fox Farm. Alvin married Ethel Durst on June 26, 1935 at St. John's Parsonage, Neillsville. After marriage they were both employed at Frank Marg's until spring of 1938. He then farmed 5 miles south of Neillsville on Hwy. 95 and lived on three different farms one quarter mile apart for the rest of his life.

In the early 1940's he picked apples at Ski-Hi in Baraboo. He drove truck for Plautz Bros. Gravel and also worked for the Clark Co. Highway Dept. Alvin also drove school bus for many years. From 1940-56 Alvin raised mink and processed mink feed for many local fur farmers. He then worked for Fullerton Lumber and drove cement truck.