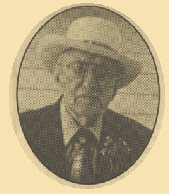 Laurence Clifton Kirk was born on Nov. 4, 1908 in Emerald, Wis. (St. Croix County) the son of Thales Allen and Mayme (Taylor) Kirk. After his schooling, he worked on the family farm until 1927. He then went to work for a packing company in Newport, Minn. and then for Friday Canning Co. in New Richmond, Wis. He was united in marriage to Mabel Rudd on Feb. 5, 1929. In November of 1929, Larry returned to Emerald and worked as the general manager of the Farmer's Exchange until 1938, when he went to manage the Farmer's Union in Cumberland, Wis. In Dec, 1939 he went to Marathon to manage the MARCO Farmer's Union. Larry moved to Granton in July of 1948, where he and his family owned and operated the Friendly Way Store until 1958. Larry became the southern Wisconsin area supervisor for Cenex from 1950 to 1956, when he moved to Minnesota to become the General Manager and expand the South St. Paul Farmer's Union Oil Co-op. He sort of retired on Feb. 1, 1974, but for the next ten years he served as an interim manager for various Farmer's Union Co-ops in Wyoming, Utah, South Dakota, Wisconsin and Montana. Mabel died on Jan. 23, 1982, and on May l4, 1983 he married Mary Abraham. Larry served as the 10-county District 1 Director for AARP in 1988 and 1989. He was the Associate State Director for AARP from 1990 through 1992, serving as the Wisconsin Delegate to the National Convention in San Antonio, Texas in 1992. Mary died on February 18, 2000.

Laurence is also survived by a sister-in-law, Viola Kirk of Clear Lake and many nieces and nephews.

He was preceded in death by his wives; two grandchildren; four brothers and three sisters.

Funeral Services for Laurence were held Saturday, March 13, at the United Methodist Church in Granton. Pastor Craig Conklin officiated. Music was provided by Charlotte Drescher, organist. Interment was in the Windfall Cemetery in Granton.