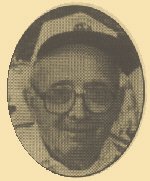 He was born in the Town of Rock, Wood County on Dec. 4, 1921 to George and Rose (Berger) Florence. He attended grade school in the Town of Sherwood. He enlisted in the Service Company 128th Infantry, Neillsville, part of the 32nd (Red Arrow) Division, on Oct. 8, 1940 and served until his discharge in 1945. He was bestowed many awards for distinguished service in the South Pacific. He attended Technical school at Wausau and worked for Kraft Foods Co.. in Kendallville, Indiana and Atlanta, Georgia for a short time. He then bought his brother's farm and later his father's farm in the town of Sherwood.

He married Gloria (Gehrke) on Aug. 6, 1949 at Immanuel's Lutheran Church in Marshfield. They lived on the farm until 1983 when he retired and moved west of the farm.

He especially enjoyed woodworking as he made many pieces of furniture for his family and friends. He also liked to go camping, ride his bike in the Pittsville 4th of July parade, playing Santa for his children and grandchildren, card playing in the Sherwood Card Club and pushing wheelchairs at the V.A. Hospital in Tomah, taking Veterans to church.

He was predeceased by his parents and two sisters, Martha Reecher and Rose Maddux. I

Services were held Wednesday, March 10 at St. Paul's Lutheran Church in the Town of Sherwood, Clark County, with Rev. Thomas Hahn officiating. Burial was in the Sherwood Cemetery.