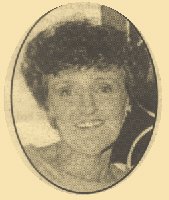 Nancy Jo Backaus was born on March 23, 1937 in Appleton, the daughter of Earl D. and Viola Ann (Adrian) Miller. She graduated from Appleton High School in 1955 and then attended St. Joseph's School of Nursing, where she graduated in 1958 with a degree in Nursing. On January 10, 1959 Nancy was united in marriage to Richard O. Backaus in Appleton. They moved to Menomonie, where Nancy worked as a nurse at the Myrtlewerth Hospital, and Richard finished his schooling. In 1960, they moved to Marshfield and Nancy worked at St. Joseph's Hospital. Then, in 1961 they moved to Neillsville and she began working at the Memorial Medical Center. She worked there for over 30 years retiring in 1995.

Nancy was a member of St. Mary's Catholic Church and St. Rose's Circle in Neillsville. She enjbyed golfing and playing cards with her friends. She will be sadly missed by her family and friends and all whose life she touched.

She was preceded in death by her parents; a sister, Janice (Miller) Campbell and a son-in-law, James Wewerka.