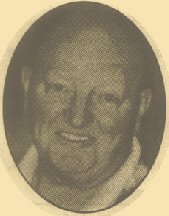 August P. "Augie" Jordan, age 60, of Wisconsin Rapids, died Friday March 12 at his home. Augie was born July 25, 1943 in Racine to Frederick and Katherine (Schober) Jordan. He was a 1963 graduate of Neillsville High School. He was united in marriage to Nancy Nordman on Feb. 19, 1966, in Neillsville.

He served in the National Guard from November of 1962 through October of 1968. He was employed as a machine operator at Golden County foods in Plover' at the time of his death.

Memorial services were held Monday, March 15, at the Higgins Funeral Home, Wisconsin Rapids. The Rev. Chester Osowski officiated. Burial will be held at a later date in the City Point Cemetery.

He will be sadly missed by family and friends.