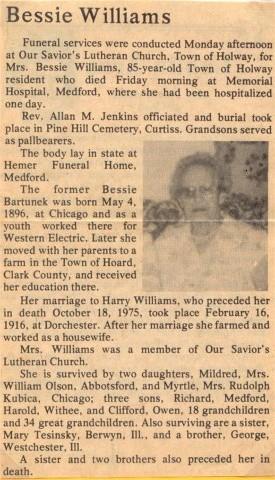 Funeral services were conducted Monday afternoon [November 30, 1981] at Our Savior’s Lutheran Church, Town of Holway, for Mrs. Bessie Williams, 85-year-old Town of Holway resident who died Friday morning at Memorial Hospital, Medford, where she had been hospitalized one day.

The body lay in state at Hemer Funeral Home, Medford.

The former Bessie Bartunek was born May 4, 1896, at Chicago and as a youth worked there for Western Electric. Later she moved with her parents to a farm in the Town of Hoard, Clark County, and received her education there.

Her marriage to Harry Williams, who preceded her in death October 18, 1975, took place February 16, 1916, at Dorchester. After her marriage she farmed and worked as a housewife.

Mrs. Williams was a member of Our Savior’s Lutheran Church.

A sister and two brothers also preceded her in death.