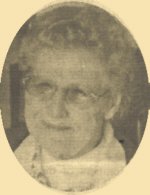 Agnes I. Meinholdt was born on Sept. 13, 1909, in Pine Valley Township, Clark County, the daughter of Ben and Clara (Beyer) Wegner. She graduated from Neillsville High School in 1927 and then attended nurses training at Milwaukee General Hospital. She graduated as a registered nurse in 1934. Agnes then returned to Neillsville and worked at the Hospital on 4th and State Street. Along with her hospital duties, she would also go with doctors on house calls to deliver babies. Later, Agnes went to work as the bookkeeper at Sniteman's Pharmacy. She worked there for many years, and retired in 1986. She was united in marriage to Louis Wegner on June 5, 1935 in DeKalb, Iowa. In the late 1940's, Louis and Agnes purchased their home on 4th Street. Louis died on April 24, 1983. Agnes continued living at their home until 2001, when she moved to the Memorial Nursing Home. During her retirement years, Agnes enjoyed playing cards and family dinners.

She was a lifetime member of the VFW Auxiliary; she also helped in the Girl Scouts and Job's Daughters organization. She was also a member of the Women of the Moose.

She was preceded in death by her husband, Louis; one son, Eugene; her parents; three sisters, Velda Thur, Doris Brickheimer, and Alma Pederson; and one brother, Alfred Wegner.

The Gesche Funeral Home is assisting Agnes's family with arrangements.