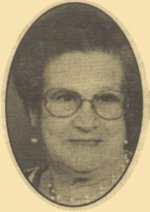 Dorothea was born January 15, 1926 in Neillsville, to Elmer and Senta (Schutte) Christman. She was employed at the Downtowner Restaurant in Marshfield. She married Raymond Durst on May 19, 1979 in Neillsville. They resided in Fairchild where she became a homemaker. She was a member of St. John Evangelical Lutheran Church in Neillsville.

She is survived by her husband, Raymond, of Fairchild.; one son, Charles A. (Debra) Meier of Hill Point; three daughters, Patricia (John) Iwaszczenko of Stratford, Jane (Douglas) Zank and Irene (Gene) Hohenstein, both of Neillsville; two stepsons, Darwin Durst of Fairchild, and Bradley (Teresa) Durst of Osseo; 16 grandchildren; and 11 great-grandchildren.