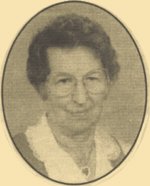 Beverly Drescher was born on August 25, 1914, in Ellsworth, the daughter of Joseph and Agnes (Block) Karl. The Karl's moved to Chelsea in 1917, and in 1920 they moved to the Neillsville area. Beverly graduated from Silver Crest School in 1928. After graduation she did domestic work for families in the area until 1935 when she was united in marriage to Warren Drescher on Sept. 7 in Crown Point, Indiana. Together they farmed in rural Neillsville for 38 years. After retiring from farming, they moved to Tacoma, Wash. for nine years. Upon the death of her husband, beverly returned to Neillsville in 1982. For the past seven months she resided at the Memorial Nursing Home.

Beverly was a member of the United Church of Christ, and she also attended Living Hope Evangelical Free Church in Neillsville. She enjoyed dancing, fishing, her sewing circle, and crafts. She enjoyed working with the Red Cross Volunteers at the Memorial Nursing Home for several years, and she had many special friends everywhere.

She was preceded in death by her husband; her parents; four brothers, Brooks, Clifford, Rufus, and Richard; and a sister in infancy.

Funeral services for Beverly were held Wed., Feb. 4, at the United Church of Christ. Pastor James Mohr officiated. Music was provided by Kathy Meshnick, organist. Interment was in the Town of Grant Cemetery.