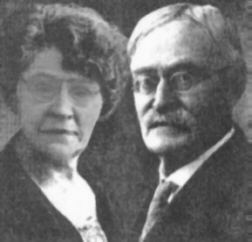 One of the happiest events of the opening days of February was the celebration last Saturday of the fiftieth wedding anniversary, of Mr. and Mrs. C. D. Fowler, at their home in this village, in the presence of family, Miss Alice, Mr. and Mrs. William Fowler, of Milwaukee, Mr. and Mrs. Dudley Fowler and two daughters, of Minneapolis, and their niece, Miss Ellen Raether, of Pocatello, Idaho.

About one hundred guests were received during the afternoon hours and entertained at a buffet dinner in the evening. The refreshments were of golden hue especially for the occasion, and the home was prettily decorated with cut flowers. The marriage ceremony came in over the radio, being read by Rev. Vaughan with a mike attachment in another part of the house. Wayland Waters played the wedding march, and several musical numbers were rendered among them being "Oh Promise Me," by Barbara and Winifred Fowler.

Many gifts, cards, and messages were received from friends and former business associates, and a beautiful chime clock was the gift from their children, grandchildren and niece on this memorable occasion. Another fine gift was the renewed photographs of the original wedding pictures of fifty years ago. But few remain who were in the wedding party. Ed Stallard, now of Madison was best man, but his health is too much impaired for him to be present. Mrs. Pattridge of Alma Center, was another guest, but she, too, was too feeble to attend. Miss Frances Fowler, sister of the groom was bridesmaid. The wedding day was clear and very cold, and the drifted highways prevented several from attending the wedding. The minister on the charge who performed the ceremony, Rev. Robinson, had several upsets with his cutter on the trip to the farm.

Mr. and Mrs. Fowler were married on Feb. 4, 1883, at the home of Mrs. Fowler's parents, near to Humbird. They began house keeping on their farm at once and resided there until 1892. For 35 years he was engaged in the lumber business, and their homes were at Fairchild, Eleva, and coming to Humbird in 1904. Mr. Fowler retired from business six years ago, after a long service with the O. & N. Lumber Co. and its predecessors.

Both Mr. and Mrs. Fowler have been active for many years in civic affairs. Since 1894 they have been active members of the Methodist church. Only one break has occurred in the family circle in fifty years, the loss of a beautiful granddaughter, Patricia, the only child of Mr. and Mrs. Will Fowler, five years ago in her ninth year.