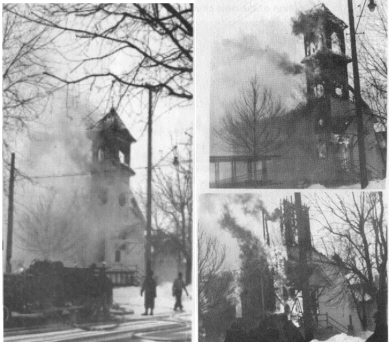 THE CHURCH FIRE--Congregational Church Burns to the Ground
by Harry Dempsey, March 16, 1941

The evening of March 15, 1941 was a summer-like night -- warm and quiet. When we, arose the morning of March 16, the wind was blowing and the air had turned very cold. It had rained and snowed. About 8:00 a.m. the fire whistle blew. I put on a light jacket and ran out the door only to return to get warmer clothes because winter had returned over night. A very strong wind was blowing. Across the street there was a roaring chimney fire, which I thought was why the whistle had blown, but the fire truck did not come. At that time someone going by told me the fire was at the Congregational Church. I got into my car, a 1928 Chevrolet, and went down to Second Street. I lived on Fifth Street. When I stopped at the corner my mechanical brakes froze. I left the car and ran to the fire. The wind was gusting up to about 70 miles per hour. When I got there, they were hooking the truck to the hydrant so I jumped in and helped get it ready to go to work.

The wind was so strong it blew burning shingles as far as the ball diamond. The houses on both sides of the church were soaked down every few minutes to keep them from burning. Roy Clark and I stayed near the parsonage at the back of the church trying to save it from the flames. Whenever we could, we would run to get dry clothes on. I changed clothes about ten times that day, using all I had and then using my brother-in-law's also. We had no rubber coats, boots or helmets to protect us. Our clothes froze solid on us.

As we were losing the battle with the fire, someone brought a pot of coffee to the house next door, also some "booze", which was the downfall of a lot of our men, including our Fire Chief who was fired that day for drinking while fighting the fire. Some of the Chief's buddies also quit. We, who were in shape, fought the f ire with everything we had, but all in vain. It was decided that if we could push in the south wall of the church perhaps we could save the parsonage, but the Chief said "No". By that time, he was in no condition to fight a fire, along with several others. One man fell off the east wall into the basement, but with no serious injury. The parsonage and church both burned to the ground. Roy Clark and I will never forget the six hours we put in fighting this terrible fire. Hester Welker was working in the telephone office when the call came that the church was burning. She remembers summoning the fire department that eventful morning.